My collection of tales, recipes, and adventures as I create and eat various foods in my wide array (and often changing) of specific diets

I have been super duper busy

I hope you all understand since this is a college blog.  I've got a new cooking partner who has given me lots of new ideas and recipes.  I've been dealing with adding more fat into my diet (coconut oils, butter, animal fats) and it's been interesting.  I promise I have lots of pictures to upload and post when I can catch a break!
Posted by nutrition_nerd8 at 12:56 PM No comments:

As most of you know, Crohn's is all about the digestive system.  And all the lovely things that come with it.

After my year of high dose Prednisone, (60mg for over 3 months) I went from more than 10 BM's a day to less than 3 a week.  So I bought some enema kits lately because I just hate waiting on miralax.  And then I had a bad weekend.  Alcohol (pear cider, wine), gluten in the form of pancakes and muffins, anxiety from new medication, nausea and fatigue from new meds.  My digestion is just a mess.  And now I'm getting headaches.

I made the mistake of buying commercial cereal (rice chex) and that has been my "binge" food (I struggle with some disordered eating coping skills) and my main food lately which is probably not a good idea.  I was going to make rice and lamb in acorn squash tonight but I'm just not hungry.  So tea and a hot bath and early to bed is the plan for tonight.

I did however, make tuna salad for lunch with homemade yogurt and it was just like using ranch dressing.  And my lacto-fermented cucumbers are coming along nicely :) which I am excited about because I loooove pickles.
Posted by nutrition_nerd8 at 4:39 PM No comments:

I've got cucumber and cucumber with carrots lacto-fermenting with grape leaves. and salt and dried dill.  I'd like to get some whole peppercorns for my next batch. and some garlic.
Posted by nutrition_nerd8 at 3:08 PM No comments:

So I've been busy making lots of yummy foods and learning all I can about natural foods, Weston A Price, GAPS and lacto-fermenting foods. 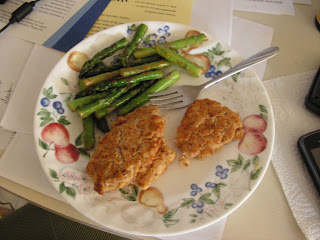 So I made something delicious out of leftover beans.  I made a whole crockpot of white beans and didn't really eat any for a few days.  So I had a lot of leftovers.  I looked online to see what I could make with what I had on hand, which is not a lot.  I made bean patties!  They were so yummy, crispy on the outside soft on the inside.  I made breadcrumbs out of gluten free bread and added some spices and an egg and fried them in coconut oil and butter ( I can't handle animal fat just yet).  Add some asparagus sauteed in brown butter and coconut oil and mmmm delicious dinner 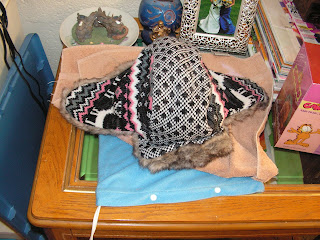 Onto making yogurt for the first time!  I used the heating pad method that Hannah had suggested way back when (healthyfamilychronicles.blogspot.com) and heated it up, let it cool, added some starter (Traderspoint creamery whole milk yogurt, local and delicious)  and then set it up overnight on a heating pad with my fashionable hat and a dish cloth.  It didn't stay at temperature overnight, but did set up. 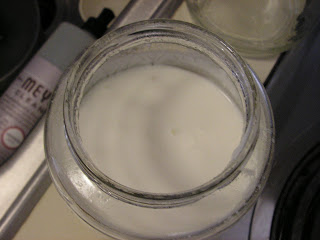 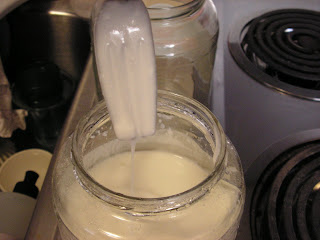 it was a little runny for my tastes ( I like thick Greek style yogurt) but it made delicious "cheese" when I strained it for the whey.  My second batch in the crockpot was much more successfull 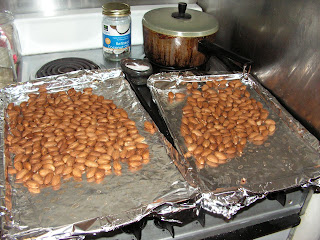 I also got raw almonds for $4.99 a pound!  Usually they are twice that much per pound so I was very happy.  I soaked them for 2 days and then dry roasted them for a few hours in the oven on warm.  It seemed to help much more when I set up the fan about 5 feet away and left the oven door cracked the entire time.  They are not the same as what I'm used to buying from the store but I like them.  Crispy crunchy and nutty.  I've got them in glass bottles in the fridge to keep them fresh. 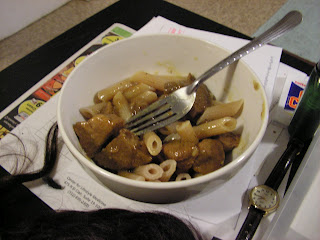 Oh I almost forgot what this was.  I made sort of Indian beef with tumeric, cumin, and other spices and boiled stew meat in it for a few hours.  I then thickened it with cornstarch (I could have put some milk in it but  I didn't think about it)  It was like an indian flavored beef stroganoff.  With gluten free noodles it was pretty good! 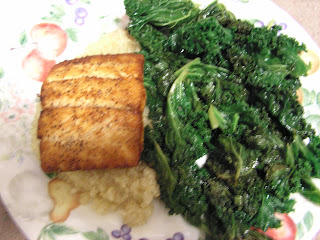 A few days ago I had salmon with soaked quinoa and a big helping of red wine vinegar kale (my favorite!)  I fried the salmon in coconut oil and butter and it was fantastic 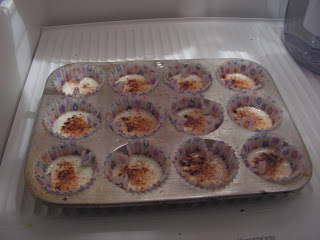 This was a recipe suggested by a friend who is a chef out in California.  Apparently there is an enzyme in ginger that makes milk kind of "seize" up and turn into custard!  So I juiced a chunk of ginger and mixed it in with milk and cinnamon/nutmeg and cooked it in the oven until jiggly (I could have probably cooked it a little longer) and then put it in the fridge to set.  I don't have custard ramekins so I used a muffin tin and liners.  They were kind of watery, but I combined them into a tupperware and mixed it together and its really good.  It almost takes like chocolate actually in a weird way.

Posted by nutrition_nerd8 at 11:03 AM No comments:

It's been a few days I apologize

It's been a few days, I haven't been feeling well.  My meds got adjusted and it was Cimzea and Methotrexate weekend so I've been kind of crummy.  I made a successful batch of crock pot yogurt (http://inthekeyoflife.typepad.com/in_the_key_of_life/homemade-crockpot-yogurt.html) and it was much creamier than my first batch with the heating pad.  I also have some dilly carrots fermenting in the pantry and they are almost to the tartness that I want, and I'm excited for them.  I got some lamb shanks with the bone in from the grocery store and I can't wait to make stock from them.  I also got plenty of coconut oil and lots of veggies.  It's been warm and I'm excited for spring and the farmers markets!  I contacted my local Weston A. Price foundation and hopefully they will become a helpful resource.  Hannah from Healthyfamilychronicles.blogspot.com replied to my email and that was a highlight of the week.  I made delicious white bean patties the other day and all sorts of other things.  I will update with pictures of the past few days soon when midterm week kind of simmers down and my health comes back up to par.  Happy and healthy eatings everyone!
Posted by nutrition_nerd8 at 6:01 PM No comments: 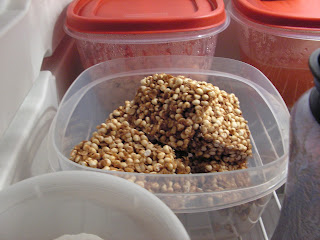 What the heck are those things? Part experiment part "use up stuff in the pantry" bars.
I found a recipe online for gluten free granola bars.  Well, I don't have granola.  Or puffed rice.  But  I did have puffed millet and a few packs of apple cinnamon oatmeal that I wasn't going to eat (I don't like oatmeal for some reason, probably texture) and had bought some peanut butter even though I'm not a fan of it, but I need the protein right now since I'm very tight in the budget. 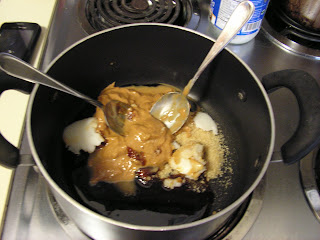 So what  I did was added 1/3 cup of creamy natural peanut butter, 1/4 cup sugar in the raw, 2 tbsp of coconut oil, 1/4 cup honey and molasses (I bought the molasses and never used it, and I didn't want to use all my honey so I found a reason for the molasses!)  Added all that together and let it melt just enough to be mixed together.  In a separate bowl, I mixed 2 cups of puffed millet and 1 cup of apple cinnamon oatmeal (2 packets) with flax 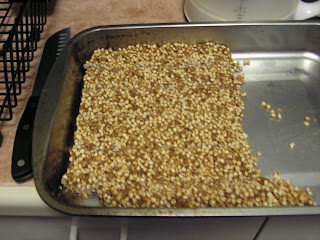 Incorporate the two, wet and dry, and usually you put it in a 8x8 pan or make enough for a 13x9 pan, which ever you have.  I do not own an 8x8 pan, and did not have enough ingredients to fill my 13x9 pan, so i just pushed it all to one side, compacted it all nice and then refrigerate it for 30 min at least.  Take em out, oh make sure to grease the pan for easy release.  Take em out and cut into bars, they might fall apart but you can eat all the yummy crumbs.  Freeze half, keep half in the fridge in an open bowel in the fridge for easy access! Great alternative to granola bars, homemade and all natural

Posted by nutrition_nerd8 at 3:04 PM No comments: 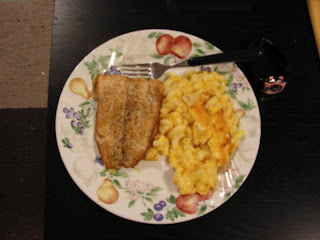 I finally figured out how to cook salmon the way I like it.
I've tried baking it, steaming it, pan frying it, marinating it, all to be disappointed.  Until the other night.  I decided I wanted salmon without marinating it.  So I just seasoned it with salt, pepper, and garlic powder and pan seared it in coconut oil.  That's it!  Crispy edges, I might have overcooked it but it was the way that I liked.  I accompanied it with some Amy's gluten free frozen mac and cheese for some extra added fat (plus it's just darn good!)
Posted by nutrition_nerd8 at 2:55 PM No comments: 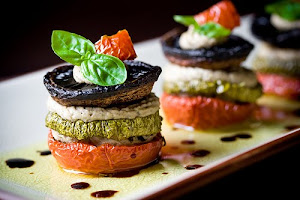